Want To Live a Little Longer? Eating Spicy Food Could Be the Answer! 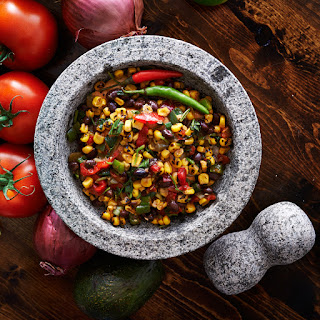 OK, so maybe the song was a bad choice... but it was worth a shot, right?
Over the years, spicy foods are one of the things I've come to love more and more. I find myself sprinkling on a little cayenne here and there, just to give my meals a little extra kick.
If you also love spicy food, then here's a(nother) reason to keep on loving them, other than the flavor, of course: spicy foods might help keep you alive longer--or at least it seems that way, according to a study published by the Chinese Academy of Medical Sciences.
The study looked at 487, 375 participants, whose medical data was on file in the China Kadoorie Biobank. The participants were between 30 and 79 years old between 2004 and 2008, when the data was collected. By the time of a median check up of those people 7.2 years later, there had been 20,224 deaths.
The researchers found that the people whose diets contained more spicy foods had a lower chance of death. Specifically, people who ate spicy food 1 or 2 days a week had a 10% lower chance, while people who consumed spicy food 6 or 7 days a week had a 14% lower chance of death.
The consumption of chilies was especially helpful, as they are not only rich in capsaicin, which makes them spicy, as well as vitamin C and other valuable nutrients. The effect was similar in both men and women, although the chance of death was lower in those that did not consume alcohol.
The study also found that regular consumption of spicy foods was linked to a reduced rick of cancer as well as heart and respiratory diseases, and diabetes. This association was greater in women than in men.
The authors are urging more research in this area. So far, they only have a link between spicy foods and reduced risk of death, but do not understand any cause or effect. It could be that chilies and other spicy foods have a direct impact on human health, or they could simply be indicative of other, generally healthier dietary or lifestyle habits. It doesn’t seem like spicy foods are making people live shorter lives though, which is good news for people who prefer their meals with a little extra kick.
So, if you needed an excuse to add a little extra sriracha to your ramen or chili pepper sauce to your eggs, this could be good news for you :) But we'll all have to stay tuned for the finer details once additional research is conducted.
Posted by Unknown at 1:15 PM No comments:

Ladies: Proof that What Doesn't Kill Us Makes Us Stronger

Breakups can be hard on people, women and men. According to a new study by researchers at Binghamton University, however, women suffer more pain from breakups than men. The flip side, though, is that women come out of that pain stronger and recover more fully--while men tend to move on without ever truly recovering.
The study was based on 5,705 individuals, across 96 countries, who were asked to rate their emotional and physical pain following breakups, on a scale of 1 to 10. Women averaged 6.84 in emotional pain, and 4.21 in physical pain, while men averaged 6.58 and 3.75, respectively.
Craig Morris, lead author of the study, hypothesizes that this is steeped in biology. Simply put, women have more at stake in a relationship. A quick fling could result in pregnancy, followed by childbirth and child rearing, while a man could just move on and never look back. So women have evolved a deeper emotional connection, and when a particularly good mate ends a relationship, they suffer more for it.
Men, on the other hand, evolved to compete for women’s attention, and following breakups, slowly come to the realization that they have to begin competing again. They don’t seem to take the same kinds of lessons from those breakups though, and seem less likely to learn from previous experiences.
Of course, this speaks simply to biology, and doesn’t much take into account differences between human cultures, or the changes of those cultures over time, though it does provide some very interesting information that historians and other social scientists could make use of.

It is still valuable now though, as some people tend to respond poorly to breakups, and high-risk individuals, who can initiate self-destructive behavior following loss, can be much worse off following a breakup. A stronger understanding of the emotional and physical response to grief could help us develop better systems to help people dealing with grief, especially those that might harm themselves or others.
What do you think--are breakups really harder on women than on men? Or do the two simply rate their pain differently? Leave your thoughts on this study in the comments below!
Posted by Unknown at 9:51 AM No comments: